The Chuntá is a traditional female character that is reenacted every year by thousands of people– mostly men (as well as women, and people of all genders) during a celebration known as the Fiesta Grande in the town of Chiapa de Corzo, Chiapas, Mexico.

What are the Chuntá’s origins?

There are two main explanations about the origins of the Chuntá: one is a local legend, the other is a hypothesis about the indigenous roots of the practice.

According to legend, the Chuntá represent the indigenous servants of a Spanish woman, Maria de Angulo. The legend has it that in the 1700s, Maria de Angulo traveled to Chiapas with her sick son, and after a local healer cured him, she threw a huge celebration to thank the town, which was facing a famine. The Chuntá announce the beginning of the celebration, known as the Fiesta Grande, by dancing through the streets, handing out food to local spectators.

The contemporary Fiesta Grande is celebrated from January 8th-23rd in honor of Saint Sebastian. As in other parts of Latin America, the Catholic church often superimposed saints onto preexisting pagan deities. Some scholars and local historians believe that the origins of the Chuntá are connected to precolonial indigenous celebrations in honor of their calendar’s New Year, and that the cross-dressing Chuntá figure was part of the symbolism of a time of year when rules could be broken and roles reversed. 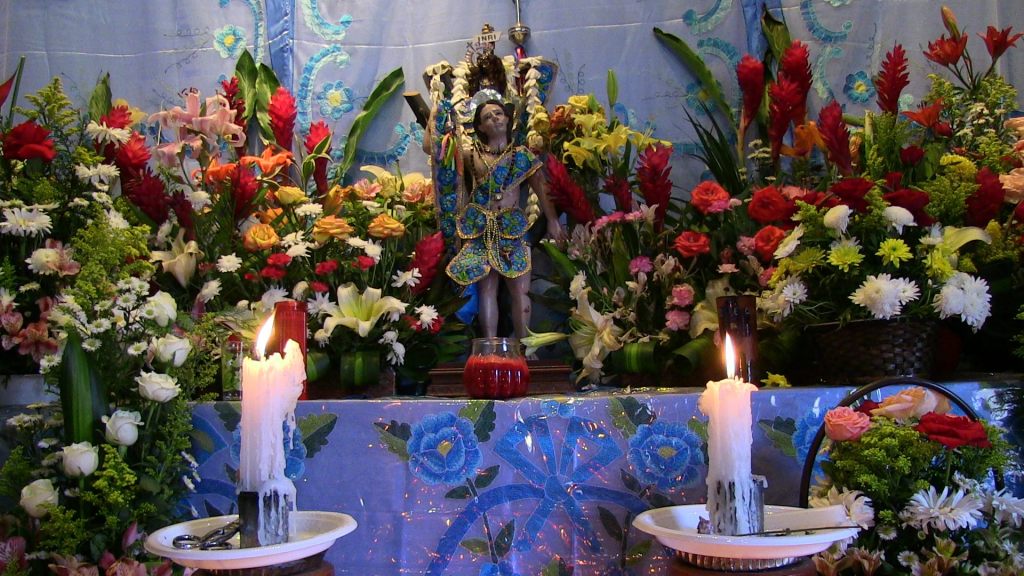 The word “Chunta” (pronounced choon-tah) is reportedly from the indigenous Chiapaneca language. Most claim that it means “servant.” Others sources claim that the name comes from the word shaunta, which translates roughly to “dressed backwards,” possibly a reference to the tradition of men dressing as women. The word “Chuntá” is generally used for both the both singular and plural; variations include “Chuntás,” “Chuntae,” and “Chuntaes.”

On the final day of the Fiesta, the Chuntá are ready to shine. Photo credit: Catalina Ausin

Are the Chuntá men or women? Gay or straight?

One cannot know a chuntá’s gender identity or sexual orientation just by looking at them. During the festival, people with diverse identities dress in similar costumes, and it becomes particularly important not to make assumptions. Traditionally, the Chuntá have been represented by straight men dressed as women. Today, thousands of people dance as Chuntá, and they may be of any gender and any sexual orientation. This includes men, women, boys, and girls; straight, gay, bisexual, asexual, and questioning people; transgender and cis people, as well as and people who identify outside of the gender binary.

“At some point, you forget who you are.” Photo credit: Catalina Ausin

The Chuntá is not an identity, it is a symbolic character that is part of Chiapa de Corzo’s annual celebration. People dress as the Chuntá only during the festival, not as part of their daily lives. In this way, it differs from the Muxe in Oaxaca or other third genders in cultures around the world.

Where are the Chuntá from?

The Chuntá are part of a large festival known as the Fiesta Grande, which takes place every year in the town of Chiapa de Corzo, in the state of Chiapas, on Mexico’s southern border.